Salt Lake liquids use salt nicotine, a type of nicotine blend that uses a crystalline based nicotine similar to what is produced in traditional tobacco leaves. Users that prefer salt nicotine praise it for its smoother inhale, which allows them to intake more nicotine per puff, creating a uniquely satisfying vaping experience. Salt Lake liquids are mixed and bottled in the United States. All of our flavors are extracted from actual base ingredients and are available 25mg and 45mg levels. Its ingredients include: propylene glycol, glycerin, nicotine, natural & artificial flavors. Salt nicotine liquids are not designed to be used in high-performance mods or vaporizers. We do not recommend using these liquids in RDA’s, RTA’s, Dripper Cartridges, or Sub-Ohm tanks. Instead, we highly recommend using Salt Lake liquids with traditional low-output e-liquid vaporizers. The nicotine used in Salt Lake liquids is salt nicotine, which is purported to cause a faster uptake of nicotine than traditional e-liquids. 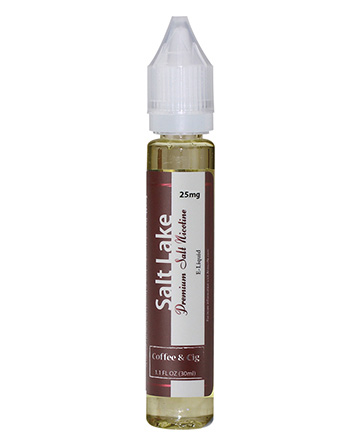 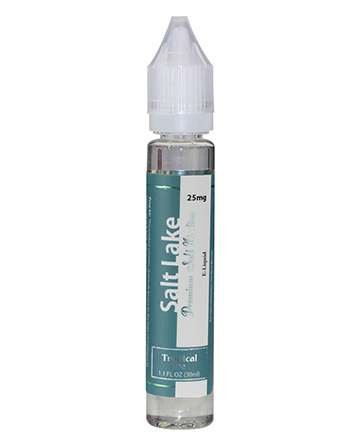 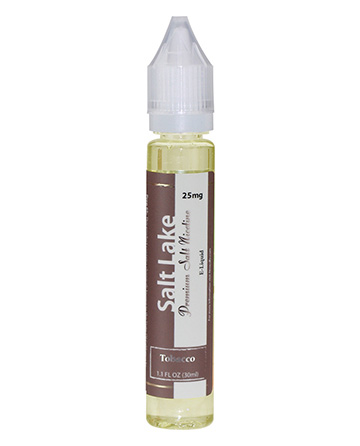 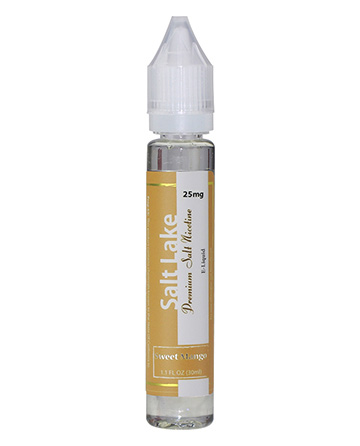 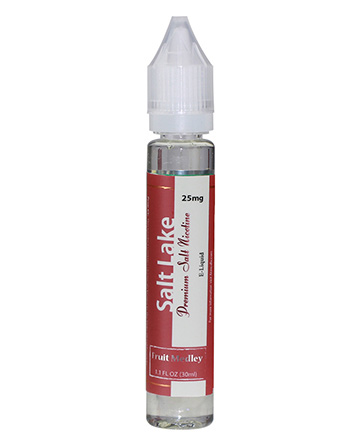 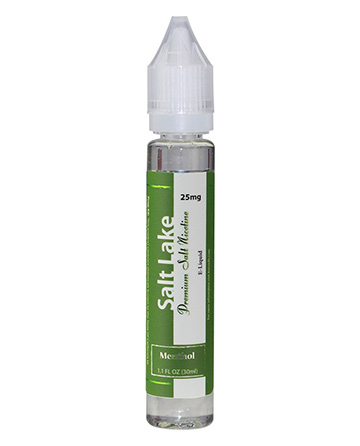 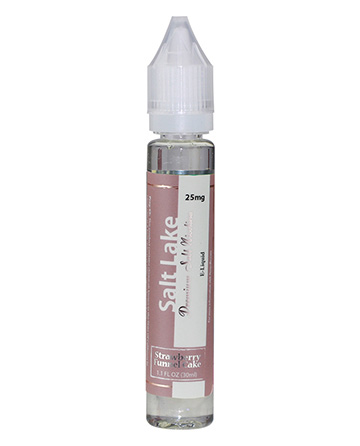 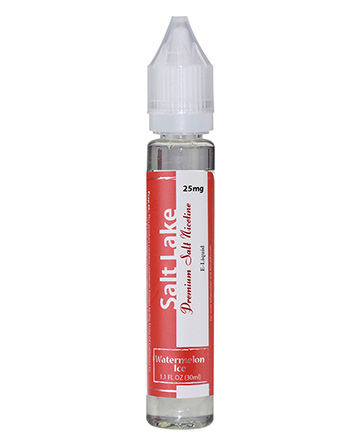 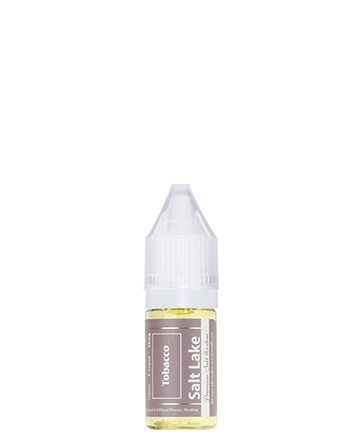 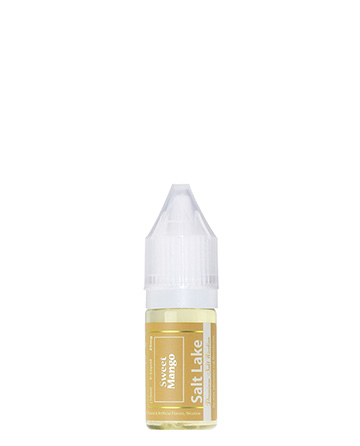 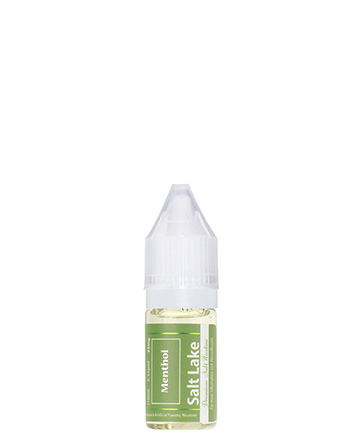 What Are Salt Nicotine E-Liquids?

Salt nicotine is a unique nicotine blend that uses a crystalline based nicotine similar to what is produced naturally in the tobacco leaf. Up until recently, e-liquids have used freebase nicotine almost exclusively. While freebase nicotine can be good for some, as it is essentially nicotine on its own, it also has to go through a number of different processes before it can be absorbed into the blood stream. This causes users to slowly uptake nicotine, rather than quickly absorbing it like traditional cigarette users might. Salt nicotine itself was discovered during examinations of the differences between the nicotine in e-liquids and those found in regular cigarettes. This was also when it was discovered that salt nicotine, or nicotine salts, increased nicotine blood absorption.

So What Does That Mean for E-Liquid Vapers?

To put it plainly, nicotine salt e-liquids deliver more nicotine in a shorter period of time. For many that means a level of satisfaction that isn’t gained through traditional e-liquid vaporizers. This is in part due to the nicotine itself being smoother. Vapers are able to take in a higher nicotine strength before feeling uncomfortable, as it lacks what is described as a harsh or rough feeling when inhaled. In addition, salt nicotine needs to be heated to higher temperatures in order to be properly inhaled and absorbed, because of this it is recommended that customers use e-liquid vaporizers with high resistance and low wattage.

What Kinds of Salt Nicotine Liquids Are There?

What Type of Vaporizer Should I Use With Salt Nicotine Liquids?

Salt nicotine liquids are not designed to be used in high-performance mods or vaporizers. We do not recommend using these liquids in RDA’s, RTA’s, Dripper Cartridges, or Sub-Ohm tanks. Instead, we highly recommend using salt nicotine containing e-liquids with traditional low-output e-liquid vaporizers. The nicotine used in Salt Lake liquids is “salt nicotine”, which is purported to cause a faster uptake of nicotine than traditional e-liquids, so please remain aware of this as you vape.

Atmos Nation is committed to only selling its products to people of legal smoking age. Please verify your age to enter.

Enter your email to get the best deals and product updates.

Contact customer support at (855) 633-3244
Due to COVID-19 coronavirus, our phones will be unavailable. Agents will be available via email info@atmosrx.com. We thank you for your support.

We are now implementing a 5 year limited warranty program. Please retain your receipt after purchasing your vaporizer. To be a part of the program, you must register your AtmosRX® Vaporizer online.

Kids got you feeling a little stir-crazy? Find how vaping can keep your stress low here!
Keep your stress from getting overwhelming - with vaping!
Vape more, worry less.Being stuck on lockdown can be all kinds of stressful. Instead of letting it all overwhelm you, take a break and enjoy some quality downtime with vaping. Check out our article on how vaping can help deal with your stress here!
Stuck inside? Self-isolating doesn’t mean you have to miss out on your favorite vape!Your favorite vape gear doesn’t have to cost an arm and a leg. Our gorgeous and powerful Kiln RA is a wax-vaper’s dream come true, while our top-notch and versatile Olé Bundle offers wax, liquid, and dry-herb vaping for anywhere at anytime. For dry herb fans, nothing quite satisfies like our classic Boss kit. The stainless-steel look keeps your kit safe from the worst case of clumsiness, while the 1200mAh battery lasts all day long.
Atmos offers direct to home delivery. Chill out and vape on from the comfort of your couch.
Order your vape gear from the comfort of home - you don’t even have to leave the house!
Relax - even when you’re feeling stressed, vaping is here for you!
Take your wax game to a whole new level with our Electro Pipe Complete System!The unique Electro Pipe Complete System is designed to fit many of our famous cartridges and batteries, making it an ideal addition for wax product vapers. This advanced system uses a durable silicone pipe instead of glass, making it better suited for travel, cleaning, and easier assembly. With three powerful battery options - the advanced SMART battery, the intuitive MR50 battery, and the versatile SWISS battery - and a multitude of accessories, the Electro Pipe Complete System is everything a wax vaper could want.
Don’t lose your head over lost wax - keep it safe with our colorful containers!
Slim, stylish, and built to last, the VICOD 5G has power to spare
Dry herb vaping doesn’t get more powerful than our compact, high-performance Ruva Vape Kit!Vaping your medicinal herbs doesn’t have to be complicated when you’ve got the singularly impressive Ruva vape kit. The vaporizer is encased in a durable heat-resistant rubberized finish for a comfortable grip, equipped with a magnetic mouthpiece for fast and easy refilling, and utilizes a large OLED screen in combination with vibration notifications to make it an ideal device for on-the-go use. Combined with precision temperature control between 330 and 430*F, and a sturdy ceramic heating chamber for maximizing flavor, the Ruva makes dry herb vaping a total breeze.